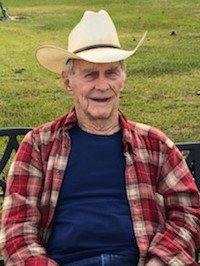 Earl R. (Doeboy) Self Jr. was born on Marchy 1, 1929 at Rochelle, LA to the union of his parents, David Self, SR and Mable Moss Self. He passed away on Friday January 22, 2021 at the LaSalle General Hospital in Jena following an extended illness. Mr. Doeboy started out working in the sawmill industry and retired in 1991 from the pipefitters union, from which he helped build nuclear power plants in many states. He is preceded in death by his wife, Elsie Mae, parents and brothers David JR, Eugene and Carl; and son-in-law Raymond Paul. Left to cherish his memory are his daughter, Donna Paul of Nebo, his son, Earl Self, JR (Dorothy) of Georgetown; sisters: Mable Mauldin of Abilene, Texas, Shirley Dickey of Rogers, Arkansas, Willie Mae Roberts of Winnfield, LA and Kay Boulding of Oak Grove, LA; seven grandchildren and sixteen great-grandchildren and eight great great grandchildren; and also a host of extended family and friends. Family will gather at 2:00 PM on Sunday January 24, 2021 at Beulah Baptist Church Cemetery at Winnfield, LA for a graveside interment service with Bro. Lamar Carpenter and Bro. Mark Breland officiating. Visitation will be at the cemetery from 1:30 until time of service. Serving as pallbearers will be Heath Bass, Logan Bass, Evan Norris, Isaac Hayes, Joey Self and Lance Self. Due to the Covid 19 Pandemic anyone attending is asked to wear a mask and follow guidelines set down by the Center for Disease Control for social distancing. Online registry/condolences: riserfuneral homes.com
To order memorial trees or send flowers to the family in memory of Earl R. "Doeboy" Self JR., please visit our flower store.
Send a Sympathy Card