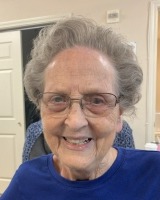 Alaine Swett Wallace was born in Hebert, LA on August 24, 1934 to Robert Swett and Cora Weed Swett. She had an older brother James (Mickey) Swett. She graduated from Mangham High School and attended a diploma nursing school in Jackson, MS where she met her future husband Ralph Wallace. They were married May 6, 1955 and had 2 children: Natalie and Mark. She originally did some nursing work, then became a homemaker when Ralph finished college. Later, she ran a home daycare with 11 preschool teacher's children.

When Ralph retired in 1990, they moved back to Hebert, where she was born, and built a home on her parents' homesite. She loved to cook and to shop, and she excelled at both.

She began having health problems in the summer of 2020, and Natalie moved her and Ralph to Palestine, TX initially to Natalie's home and then to Dogwood Trails Assisted Living. Ralph preceded her in death on May 2nd of this year and was buried on their 67th anniversary.

She passed away on October 21st and will be interred at Hebert Cemetery on Tuesday, October 25th, after services at Bethany Baptist Church in Hebert, LA at 2 PM. Interment will be under the direction of Riser and Son Funeral Home of Columbia, LA.

Visitation will be Sunday, October 23rd at Herrington/Land of Memory Funeral Home in Palestine, TX from 3PM to 5PM.

She is survived by her daughter, Natalie Burks; her son, Mark Wallace; as well as grandchildren, Joshua Burks, Andy Burks, Emily Burks Mitchell, Clay Mitchell, and Elissa Elliott. Her beloved great-grandchildren are Caleb and Olivia Burks. She also has numerous cousins in Louisiana.

She is fondly remembered by the Dogwood staff, her family, and anyone who met her for more than 15 minutes for her “sassiness” and good sense of humor.

To order memorial trees or send flowers to the family in memory of Alaine Swett Wallace, please visit our flower store.